Over the past few decades, home owners and business owners have been reluctant to apply window film to windows because of rumors about seal failure. As a window film company, the possibility of being bias can occur, however; this article will be transparent about all findings.

of seal failure can appear with or without window film. The best place to start looking at seal failure would be the design of the Insulated Glass Units (IG Units). Insulated glass units incorporate a sealed space, containing air or some form of gas between two panes of glass. The two panels are separated by spacers, which typically contain some type of desiccant (a powder that absorbs water) to absorb any moisture that makes its way through the unit’s seal.

All Insulated Glass Units allow water vapor to migrate into the space at some rate. This is not a result of seal failure, rather it is the nature of the product. According to Drew Vass from the Window Film Magazine, “if too much moisture penetrates the unit, the desiccant will eventually be expended and will no longer be able to absorb the moisture and be effective. This is known as seal failure and will often cause a unit to become fogged or hazy.” Insulating glass manufacturers contend that window film, when applied to an IG unit, will absorb and reflect solar energy within the airspace causing a temperature imbalance that may result in increased visible condensation. In 2000, the Window Film Committee of the Association of International Metallizers, Coaters, and Laminators (AIMCAL), conducted a research study involving a test on window film on 6 new commercial (IG) Units and 12 residential (IG) Units. They commissioned A. William Lingnell (B.S. Civil Engineering, M.S. Civil Engineering, M.S. Mechanical Engineering, M.S. Engineering Science) a technical consultant to the Sealed Insulated Glass Manufacturers Association (SIGMA) to conduct standard tests on standard sealed units with and without window film. The results of such research concluded that “window film had no observable effect on the performance of high quality manufactured insulating units.” However; if window film is installed on an IG Unit that is already close to seal failure or has seal failure, window film will absorb the heat within the airspace and form more condensation. Warranties from window film manufacturers can guarantee that their films, when properly installed, will not cause glass failure due to seal failure if there are no preexisting conditions of seal failure (Click here for information on study).

Many Insulating Glass Manufacturers will declare their manufacturer’s warranty null and void in the event that window film is applied. The photo to the left, shows a home where window film was applied over 10 years 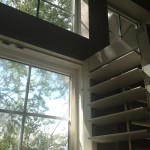 ago to the upper windows but not the lower windows. The lower windows show seal failure and fading of frame, whereas the windows at the top did not show any signs of seal failure. The customer believed the shutters would block the heat and glare but the UV rays faded and cracked the paint.

Seal failure can be an eyesore to your home or business. Foggy or hazy windows are not appealing to visitors and customers. If the wrong window film is applied to a window, there could be a higher chance of seal failure or even thermal stress. We are the only window tinting company in Denver, CO where Richard Marti, owner/President of All American Window Tinting, achieved Master Accreditation through the International Window Film Association (IWFA). The IWFA is an international association of window film manufacturers, distributors and installers dedicated to the improvement of products and services for the consumer.  As part of this dedication, the IWFA has developed a test designed to evaluate the knowledge and skill of the professional installer.  If you have been hesitant about installing window film to your home or business, contact All American Window Tinting today at 303-936-1362 to schedule a FREE estimate!!  Our estimator will come to your home or business with a variety of samples to meet your needs.  You can also visit us online at www.allamericanwindowtinting.com to see some of the projects we have completed!