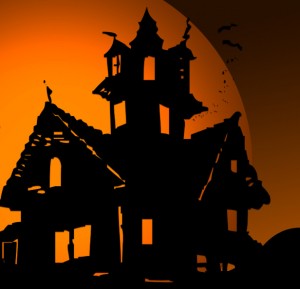 It was late October in Colorado and the Napier’s were getting ready for their annual Halloween party. They were going to rearrange their living room to make it a little more spacious for the party. They started with the couch. That’s when they saw it. The end of the couch that was closest to the window had a large shadow on it. It was a frightening sight! Next was the rug. When they moved the rug, another large shadow appeared. This shadow was shaped exactly like the rug. At this point, they were spooked. Where were these shadows coming from? The last item to move was their prized America Gothic Painting. They wanted to move it out of the room to avoid it getting damaged. A look of horror crossed Harley Napier’s face. Their prized painting had a shadow too!

That’s when Jack Napier looked around and knew it had to be his scary windows that were causing the shadows to appear. He had heard of window tint for homes and wondered if that would help get rid of the shadows. So, he called the expert window tint company, All American Window Tinting for a consultation.  AAWT arrived unsure of what to expect. They had never heard anyone complain of shadows on floors, furniture and artwork. AAWT walked into one of the scariest sights they had seen. The couch was complete 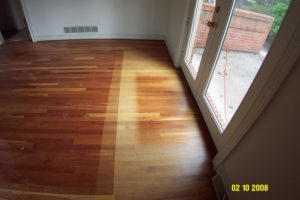 ly discolored in certain areas. The hardwood floors were faded in the same shape as the rug that covered it. The colors in the American Gothic Painting were no longer bright and vibrant. AAWT knew this was not shadows, this is Sun Damage! What the Napier’s thought were shadows were actually fading spots caused by the sun!

The Napier’s were new to Colorado. They did not understand the high altitude in Colorado meant more exposure to UV rays. Which meant more problems with sun damage. Protecting themselves, their loved ones and their prized possessions was a must and Window Film is the answer!

As All American Window Tinting was explaining the differences between the product options Mr. Napier received a call from his staff that seemed to frighten him. Weird etchings and marks were seen on the glass in his Supernatural Potions store. The staff assumed they were caused by the ghosts that ha

unted the building. They had noticed the ghosts only when it was dark.  Mr. Napier asked AAWT to follow him to the store. When they arrived, the glass didn’t frighten AAWT. We knew it was caused by vandals, not ghosts! No need to fret, we have a solution for that too! Anti-Graffiti window film will act as a sacrificial coating. When etching or graffiti occurs, the window film can be removed and replaced at a lower cost that won’t scare you like the cost to replace the entire piece of glass would!

That got AAWT to thinking, what if these ghosts were actually thieves trying to steal The Napier’s potions. He had the answer for that too! Safety and Security film with an attachment system. This product will reinforce the glass and mount it to the frame of the windows. Keeping thieves from being able to break the glass with a magic wand or even a rock. Helping keep those potions safe! The Napier’s have all their glass covered now. No more ghosts haunting their buildings and all signs of shadows have been eliminated. 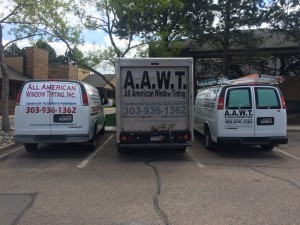 When you see one of these vehicles you know the expert window tint company is on the job!  Whatever the scary situation you may have with your glass in Colorado, AAWT has the answer! With over 25 years of experience. We are the professional expert window film company in Colorado. We have the solution to all your Home, Office and Automotive window tint needs. Call for a free quote, 303-936-1362