Have you taken a look at your windows lately? Many people have homes and businesses that carry the scars of seal failure. Below you will find pertinent information about seal failure in windows, what to look for to determine whether or not you are experiencing seal failure, how its caused and ways to avoid it!
What is Seal Failure?
Windows are commonly called dual pane windows, insulated glass (IG) windows, thermal windows, or just sealed units. They are made up of 2 or more sheets of glass that are separated by a spacer and sealant system, creating a sealed airspace. If a break occurs anywhere in this seal along the edge, moisture can become trapped between the two glass sheets (panes). The specific point of failure is not normally seen because the seal itself is actually inside the frame of the window. 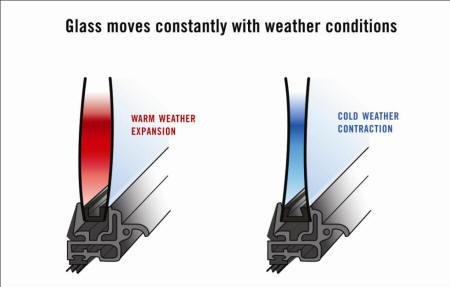 -Drastic temperature changes that cause the window panes to expand and contract
-Any movement of the structure (examples; settling, severe weather)
– Sunlight can actually deteriorate the seal itself
– Constant exposure to water
-Manufacturing errors
Resolution – IG Unit Replacement

The source of the seal failure is quite difficult to find and even more difficult to fix, due to the variety of pieces that come together to create the actual unit. It is a rather challenging task to fix this issue correctly, that is why replacement of the actual unit is always best. Don’t get stuck with a DIY tragedy. All American Window Tinting, Inc., is made up of a team of highly trained professionals that are ready to get the job done right!

Tips
In order to maintain the value and dependability of your windows, you must follow proper maintenance and care instructions. No one window is perfect and even if you follow all of the guidelines for your windows seal failure can still occur. Tips to Avoid Seal Failure: 1.  Keep weep (drainage) holes clean and free of any contamination. 2. Do NOT place any object in, on or too close to the window’s glass, doing so can trap excessive amounts of heat between the window panes causing seal failure (even drapery and blinds that are mounted too close can cause seal failure.) 3. Always, always, always keep record of your window’s warranty and any and all information received from manufacturer and company who installed the actual unit.
Did You Know?

A. William Lingnell, an engineer of Lingnell Consulting Services and the technical consultant to the Sealed Insulating Glass Manufacturers Association (SIGMA) conducted tests to see the effect of window film on windows. He concludes that based on testing conducted on window units, window film has no observable effect on the performance of high quality manufactured insulated units. Six units with film and six units without film were selected for his accelerated weathering test and two for the fog test, the testing proved that there was no observable differences between the two tests. This testing shows that the installation, manufacturing, and quality of the installed units plays a vital role in determining whether or not the the seals will fail with the use of window film. So if your looking to get window film installation on a new install of an IG Unit, rest assured that the combination of both would bring great value and benefits to your home or office.

Get a clear view back! To replace your seal failed windows, contact All American Window Tinting, Inc. at 303-936-1362 to schedule your appointment today!